Ruido Fest’s 5th anniversary is here! This year a wide variety of sponsors and community partners will be bringing unique, fun experiences to our new home in Chicago’s beautiful Union Park. You can get a sneak peek below. 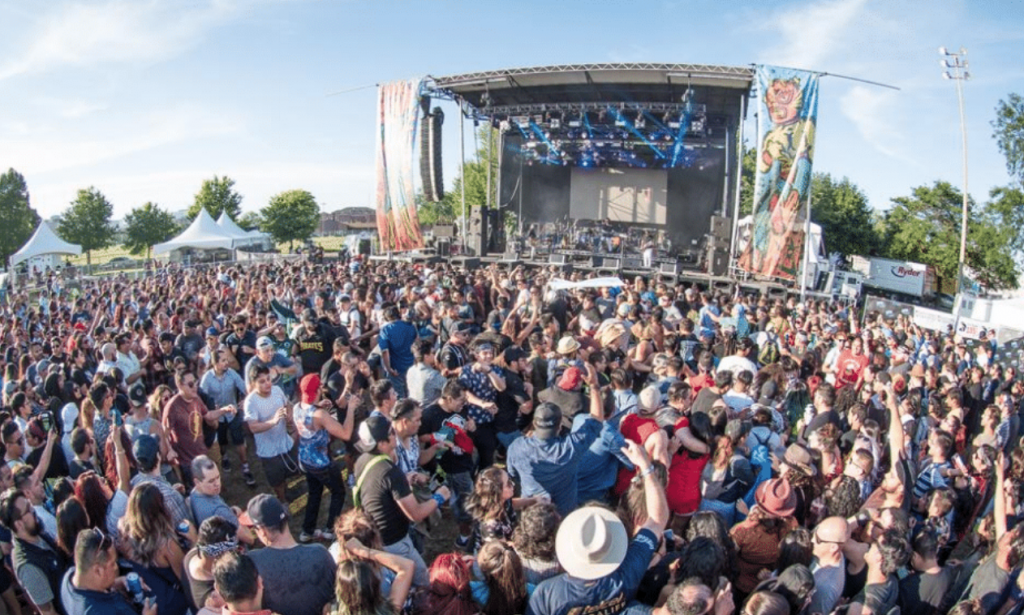 This year’s sponsor, the MHOA (McDonald’s), invites you to stop by the McDonald’s area to cool off with samples of the new McDonald’s slushies and test your throwing skills on the McDonald’s target wall for your chance to win McDonald’s swag. ¡Los esperamos ahí!

Through the Discover Chicago experience, Xfinity will be hosting a variety of interactive engagements including: a free WiFi connection, a touch-screen kiosk, virtual puppies or spin their own DJ track, as well as a photo booth to place themselves in famous Chicago-based TV scenes!

IlliniCare Health will be hosting a series of fun fitness and health activities each day for a chance to win a VIP upgrade! Activities will include hula hooping, jump rope, and dance sessions. They’ll be closing out the weekend with a “Wellness Wind-Down” providing fruit-infused water and healthy snacks.

We have had the pleasure of working with a wonderful group of community partners this year; including the Gene Siskel Film Center, the National Museum of Mexican Art, Yollocalli, the Latino Cultural Center, Pilsen Fest, Mujeres Latinas, Voto Latino, HeadCount, and OurMusic MyBody. Make sure you take the time to stop by the community tent at Ruido Fest this year to learn more about each organization. 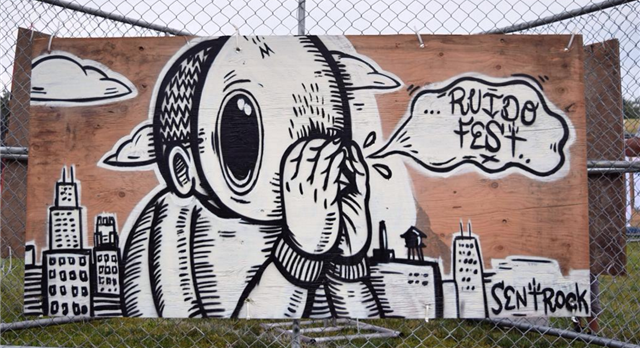 The Yollocalli Arts Reach is a youth group run by the National Museum of Mexican Art! Their talent group of artists will be creating live art for your enjoyment at the festival.

OUR MUSIC MY BODY 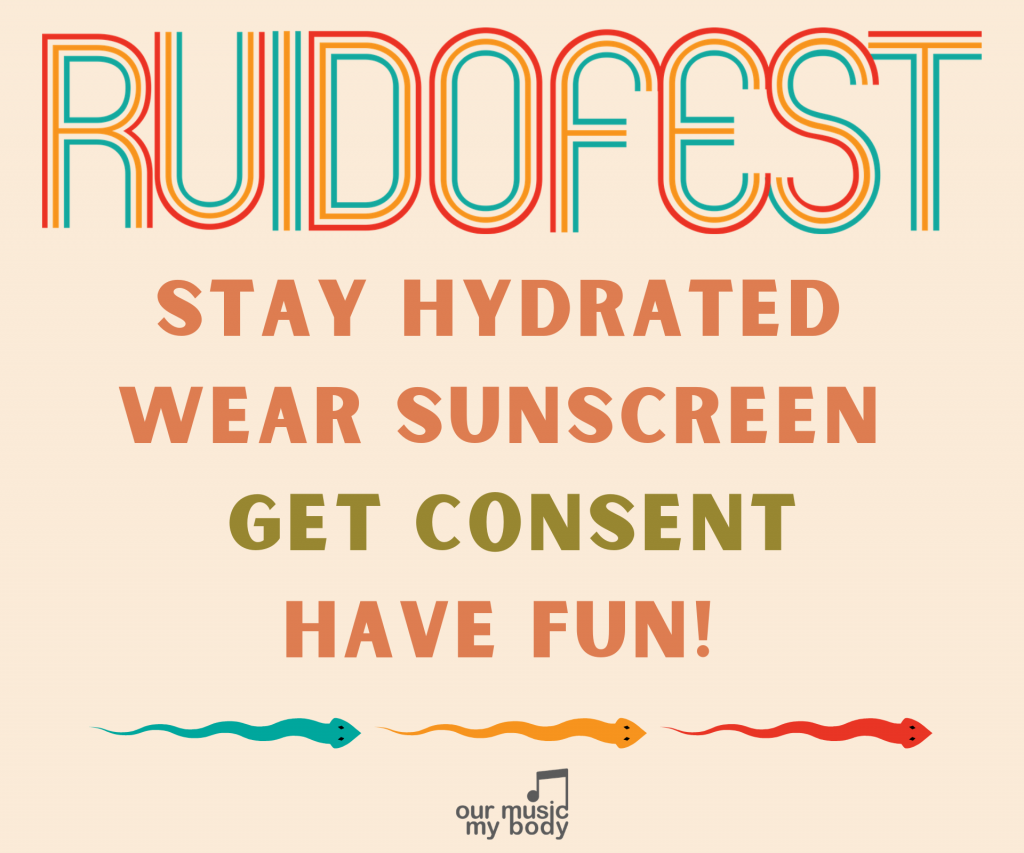 Ruido Fest has zero tolerance for sexual harassment at the festival; everyone has the right to enjoy it in a safe, comfortable, and consensual manner.

“OurMusicMyBody is a campaign to raise awareness about sexual harassment in the music scene. We believe everyone deserves to feel comfortable and safe when at a concert/festival. We work with festival and venue staff, musicians, and music fans to create fun and consensual music experiences for all.” 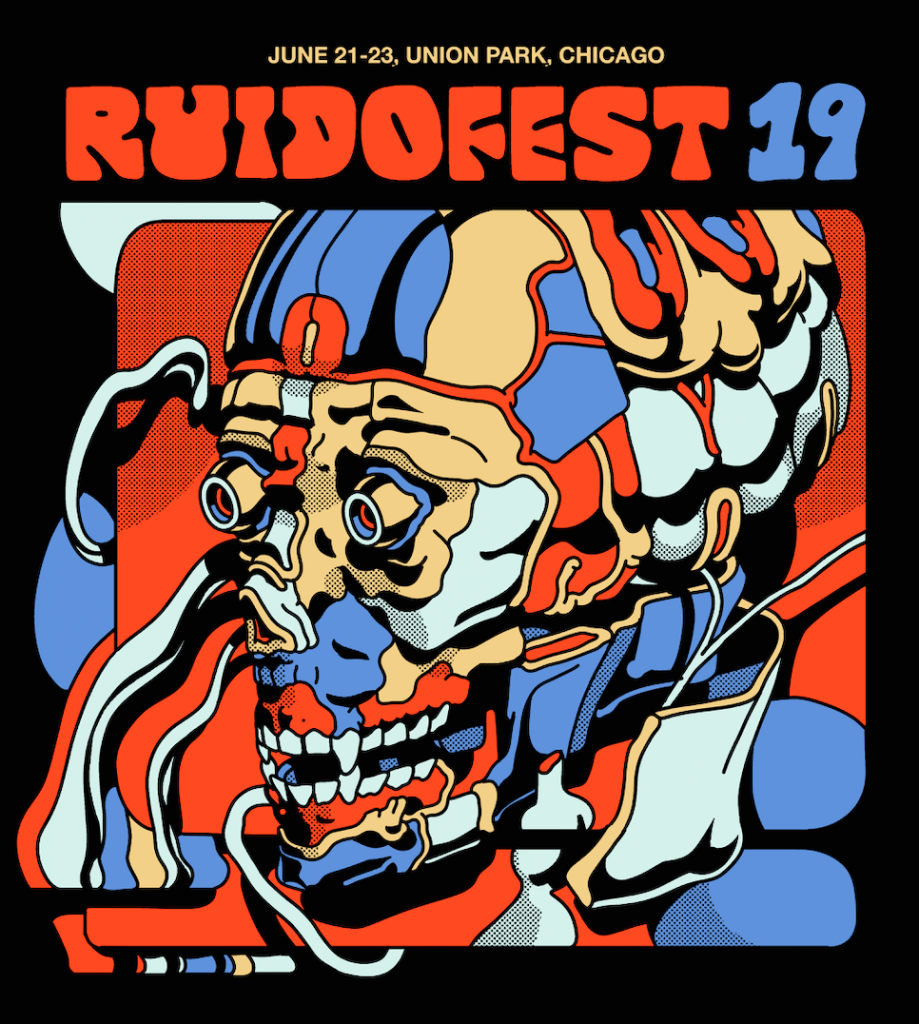 Check out Toyota’s awesome addition to the Ruido Fest lineup! They have curated their own music den, where you can watch performances from talented, up and coming artists; including Kablito, Nina Dioz, Jesse Baez, Loyal Lobos, The Red Pears, Marron, Danileigh, Camila Luna, Clubz, and Girl Ultra. 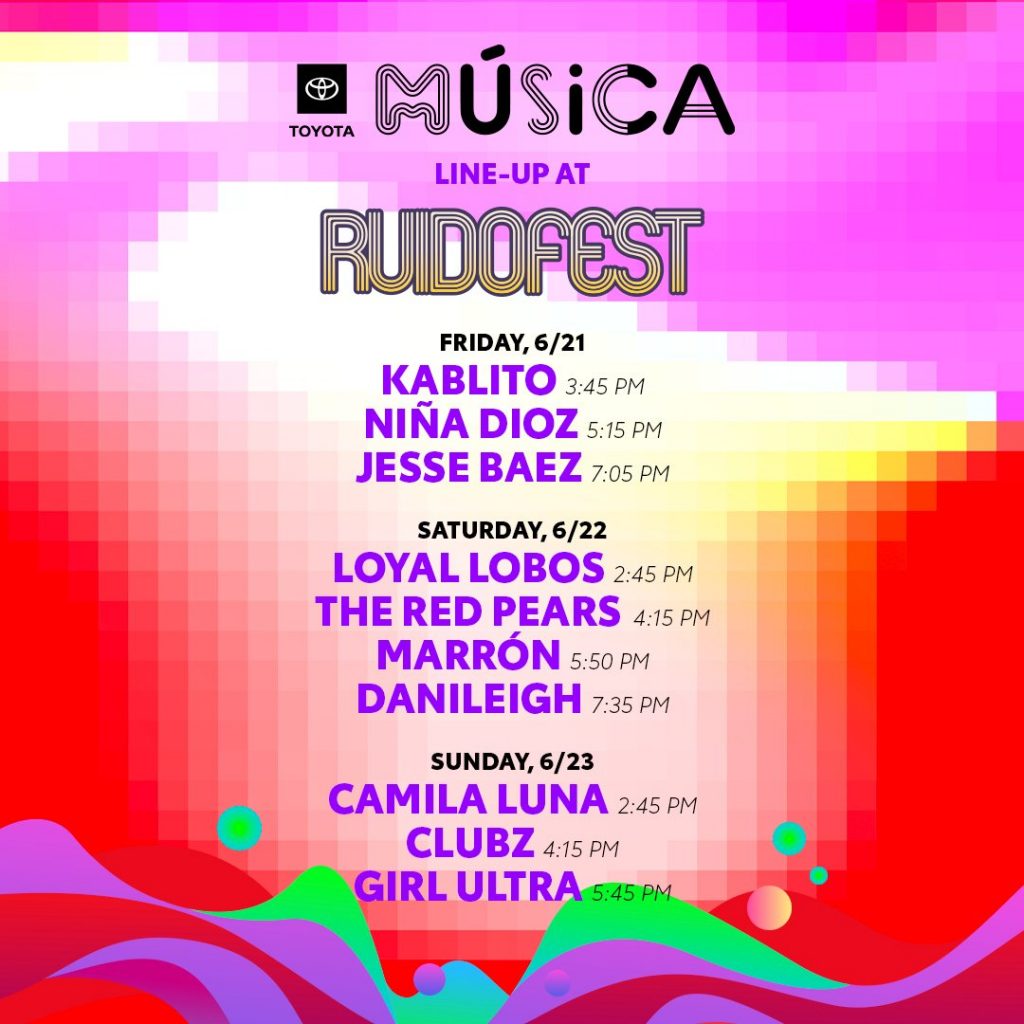 Want to cheer on your favorite wrestler? Then our Lucha Libre is for you! 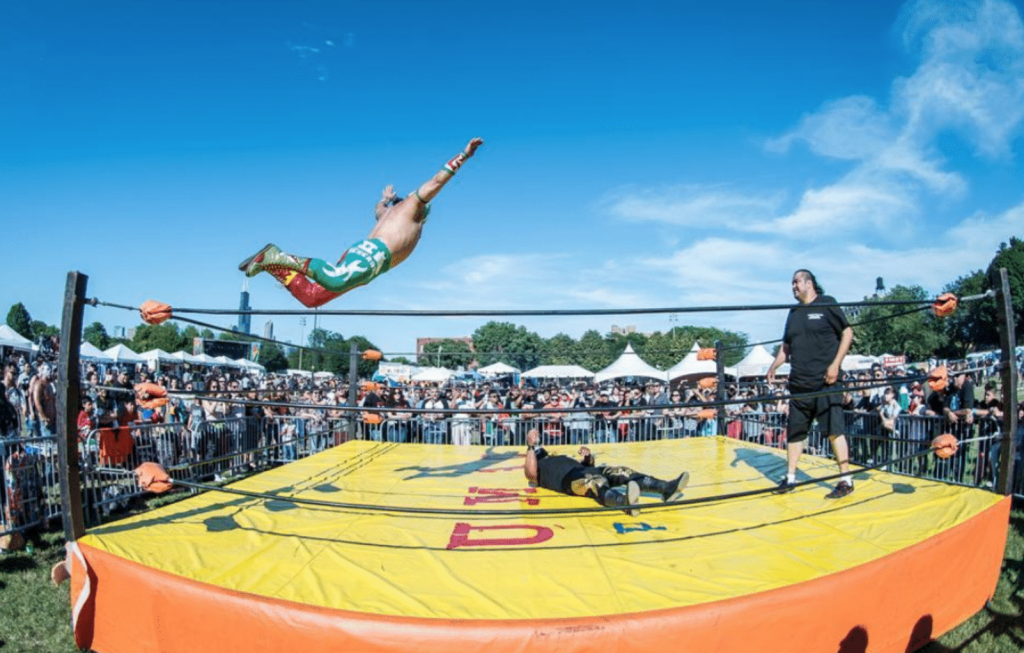 GET YOUR RUIDO FEST TICKETS NOW!

Vanessa Zamora is revolutionizing the pop-indie scene in Mexico with her dreamy guitar and rocking synthesizer. She is known for showing vulnerability in her lyrics and her online blog. Vanessa Zamora will be playing from 7:30 – 8:30 PM on Friday at the Steel Stage.

Hailing from Logan Square, Tatiana Hazel is quickly becoming a certified legend in the Chicago indie-pop scene. Tatiana Hazel has been a favorite of other Chicago artists and was even featured on local rapper, Kweku Collins song, “The Wayside.” Tatiana Hazel will be playing from 5:15 – 6:00 PM on Saturday at the Steel Stage.

This Latin Grammy-winning ensemble Monsieur Perine features lead singer Catalina Garcia from Bogota Colombia. Catalina is multilingual in that she is known for singing in Spanish, English, French, and Portuguese. Monsieur Perine will be playing from 5:45 – 6:30 PM on Saturday at the Platinum Stage.

This all-female group hits the nail on the head with their modern-day Mariachi music. Flor De Toloache breaks the boundaries of the typically all-male genre. Flor De Toloache will be playing from 4:15 – 5:00 PM on Saturday at the Platinum Stage.

Colombia’s very own electronic-indie artist, Ela Minus really can do it all. Starting as a drummer, Ela Minus creates all of her music by herself. She puts on a unique live experience using only her voice and hardware machines – laptop not included. Ela Minus will be playing from 5:15 – 6:00 PM on Sunday at the Steel Stage.

Jarina De Marco exceeds the limits of traditional Dominican music by creating her own genre. If you are a fan of the Comedy Central show, ‘Broad City’ you might even recognize her first single ‘Tigre’ which was featured on the show’s soundtrack. Jarina De Marco will be playing from 4:15 – 5:00 PM on Sunday at the Platinum Stage.

Known for having a diverse sound, Mamita Peyote gives listeners a unique mix of reggae, ska, quarter, swing, and gypsy punk. On top of that Mamita Peyote was one of the winning bands of the National Cultural Equality Contest. Mamita Peyote will be playing from 4:15 – 5:00 PM on Sunday at the Steel Stage.

Up and coming Mexican artist Niña Dioz is bringing a fresh sound of alternative rap to Ruido Fest this year. Niña Dioz is highly sought after with other musicians and has collaborated with Plastilina Mosh, MLKMN, Ximena Sariñana and Li Saumet of Bomba Estereo. Niña Dioz will be playing from 5:15 – 5:55 PM on Friday at the Toyota Music Den.

Part of Finesse Records located in Mexico City, Girl Ultra is the queen of her domain of R&B music. She is also known for her Spanish covers of songs from artists including Drake and The Weeknd. Girl Ultra will be playing from 5:45 – 6:25 PM on Sunday at the Toyota Music Den .

South Florida’s own DaniLeigh is the full package. Discovered for her dancing, DaniLeigh is the perfect addition to Ruido Fest by bringing her Summer vibes. She also recently released her music video featuring hip-hop superstar, Chris Brown. DaniLeigh will be playing from 7:35 – 8:20 PM on Saturday at the Toyota Music Den.

Originally from Argentina, Silvina Moreno discovered her passion for music at a young age. Soon after she moved to the United States to attend Berklee College of Music in Boston. Silvina Moreno takes inspiration from underground indie-pop music spanning from places like Brooklyn all the way to London. Silvina Moreno will be playing from 2:45 – 3:30 PM on Saturday at the Platinum Stage.

Growing up in Ecuador then Minneapolis Kablito was a fan of the local R&B radio station that played music from Prince all the way to Jimmy Jazz. Vogue published an article that went into detail about Kablito’s 90’s aesthetic and bopping R&B sound. Kablito will be performing from 3:25 – 4:25 PM on Friday at the Toyota Music Den.

If Mazzy Star, Nick Drake and the sound of Colombian flare had a musical lovechild it would be Loyal Lobos. Now based in Los Angeles, Loyal Lobos brings a whole new perspective on alternative-folk music. Loyal Lobos will be playing from 2:45 – 3:25 PM on Saturday at the Toyota Music Den.

Puerto Rican native and 2015 & 2017 Latin Grammy nominee, Camila Luna has a unique charm. Camila Luna’s musical genius can also be reflected in her poetry. She is also a teaching assistant at the University of Miami. Camila Luna will be performing from 2:45 – 3:25 PM on Sunday at the Toyota Music Den.

Las Mujeres de Ruido Fest June 19th, 2019ruido
Sticky Post By ruido Posted in News Permalink
Chilean powerhouse Francisca Valenzuela will be joining us to perform at Ruido Fest, and we are highly anticipating her set.
With an stablished career in Latin America, the singer / songwriter, activist and leader, is at forefront of Ruidosa and has had an impressive career so far; with multiple gold and platinum certified albums, her own award winning record label and a new tour that has taken her to share the stage with the likes of Shirley Manson, Beto Cuevas, and St. Vincent to name a few. She has collaborated with U2, Miguel Bosé, Pablo Alborán, Natalia Lafourcade and Ximena Sariñana, among others.
Considered a beacon of catharsis and a force to be reckoned with for her live shows,
her discography consists of three studio albums and her most recent single, “Ya No Se Trata De Ti”.
Catch her directorial debut for this song here:  and do not miss your chance to see  her live for the first time in Chicago at Ruido Fest! World renowned performance artist Silverio is proud to announce his newest venture, and his first entry into the pre-prepared food market, Royal Highness Tamales.  The collaboration with Mexico’s most respected DJ and Chilpancingo Produce, Inc will be distributed in grocery stores and select restaurants starting this summer. Ruido Fest will host the exclusive premier of the tasty treat, which will be tossed at fans from the stage during his set.  Tamales will also be available for purchase to throw at Silverio. Be sure to stop by Chilpancingo Produce’s tent because supplies will go fast!

Samples of the following tamale flavors will be available for a limited time:

For more information on Royal Highness Tamales, go to ROYALHIGHNESS.COM or RUIDOFEST.COM/NEWS. Bomba Estéreo‘s founder Simon Mejía in his documentary “Searching for Sound” talks about the inspiration that comes in every Bomba Estéreo song. This is a band that’s proud to be Colombian. They’ve mixed electronic music with tropical and folk sounds.

They will be performing at Ruido Fest on Friday, July 7th.

the NEW VIDEO from

Gepe’s new studio album is a reality.
The recently released single “Hablar de Ti” advances the singer’s sixth album, expected to drop on May 26th.
Romanticism, honesty and simplicity are some of the attributes of “Hablar de Ti”, the most recent single by Daniel Riveros. The song resonates between the ballads of his prior releases and the pop melodies of his most endearing hits. The song confirms the return of the renowned artist and it features Cristián Heyne, Fernando Herrera and Gepe – himself as producers and musicians, in sessions that were characterized by their spontaneity, and reflect the freshness conveyed in this track .
“Hablar de Ti” is the sing that gives birth to Gepe’s new release “Ciencia Exacta”, available in streaming platforms as of  Friday 26 of May.
Advance music available upon request.